Your Nagios server was shutoff unexpectedly and now you see the “database backend” with a red exclamation in the web GUI. The only thing you can do is try to start the process, but it comes back with ndo2db is not running. 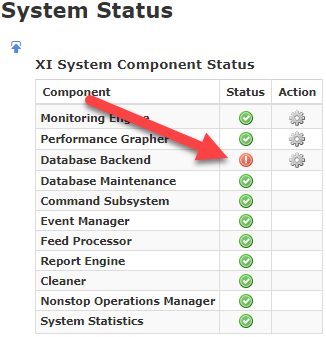 Fortunately, the fix is pretty simple. Feel free to copy/paste the commands to avoid typos. Just make sure you omit the ‘#’ on each command otherwise the command won’t run. Assuming you have already tried restarting the ndo2db service, go to the command-line and verify it is not running.

Still on the command-line, stop the nagios service so you don’t mess anything else up in the process.

Run the ‘ls’ command and you should see something similar to what is below (minus the dates of course).

Now rename/move the two files using the commands below.

Now, just restart your nagios service and ndo2db service using the commands below.

Run the service status command to verify it is now running. You should see the red exclamation change in the web status as well. Voila!

31 thoughts on “Nagios – ndo2db not running”