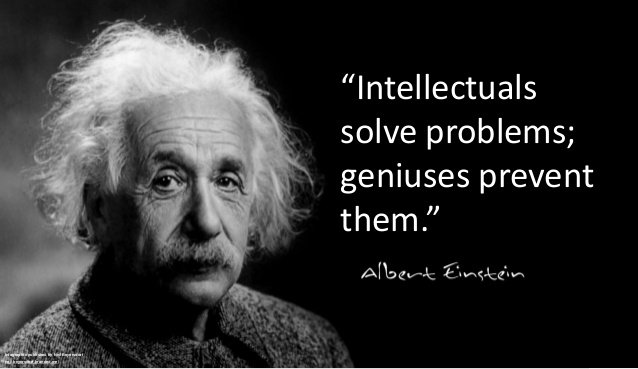 Intelligence is the ability to adapt to change. – Stephen Hawking

The secret of getting ahead is getting started. – Mark Twain

We cannot solve our problems with the same thinking we used when we created them. – Albert Einstein

The present is theirs; the future, for which I really worked, is mine. – Nikola Tesla

I do not think there is any thrill that can go through the human heart like that felt by the inventor as he sees some creation of the brain unfolding to success… such emotions make a man forget food, sleep, friends, love, everything. – Nikola Tesla

The most damaging phrase in the language is: ‘It’s always been done that way.’ – Grace Hopper

There is nothing more powerful than an idea whose time has come. – Victor Hugo

When something is important enough, you do it even if the odds are not in your favor. – Elon Musk

My own thoughts, ramblings, and quotes

Learn the fundamentals and nothing will ever look like magic.

Never assume the loudest talker has the most to say.

If you didn’t wake-up with the burning desire to improve the world… you need better goals.

I’d rather be sand and see the dirty underside of the world than be the ostrich.

Cybersecurity is a process, not a destination.

What is the difference between a *good* security program and a *great* security program? In the latter, it becomes increasingly difficult to differentiate the various “components” from one another.

The easy install of today will become the gaping security hole of tomorrow.

Strive to be the smartest person in the room, but never assume you are.

You either overcome obstacles or let them serve as constant reminders of what is holding you back.

Stepping out of the echo chamber will help you hear its flaws.

The internet has its demons, but its impact on democracy everywhere is undeniable.

Stand on any mountain you choose, but be prepared to defend it.

Anger is a powerful emotion that is often horribly misguided.

Perfection in infosec is a myth. Don’t chase unicorns.

Never confuse frugal with cheap. They have different motives and outcomes.

Some do while others talk about doing.

Nothing changes one’s perspective more quickly than a funeral or a dirty diaper.

Worry about yourself and your customers and you won’t need to worry about competitors.

You can lead a horse to water multiple times, but you’ll be accused of drowning it if you try to hold its head there long enough.

Competence is an ally for some, but not all.

Misinformation can be far more damaging than a lack of information.

I prefer friends who tell me my flaws.

I’ve concluded there are 4 types of people in infosec:
25% are experts & know what they don’t know
25% are experts, but frequently venture outside that knowledge set
50% silently lurk because they feel they’re not smart enough
34% just make up things like statistics to sound smart